Our Top Predictions For SXSW 2023 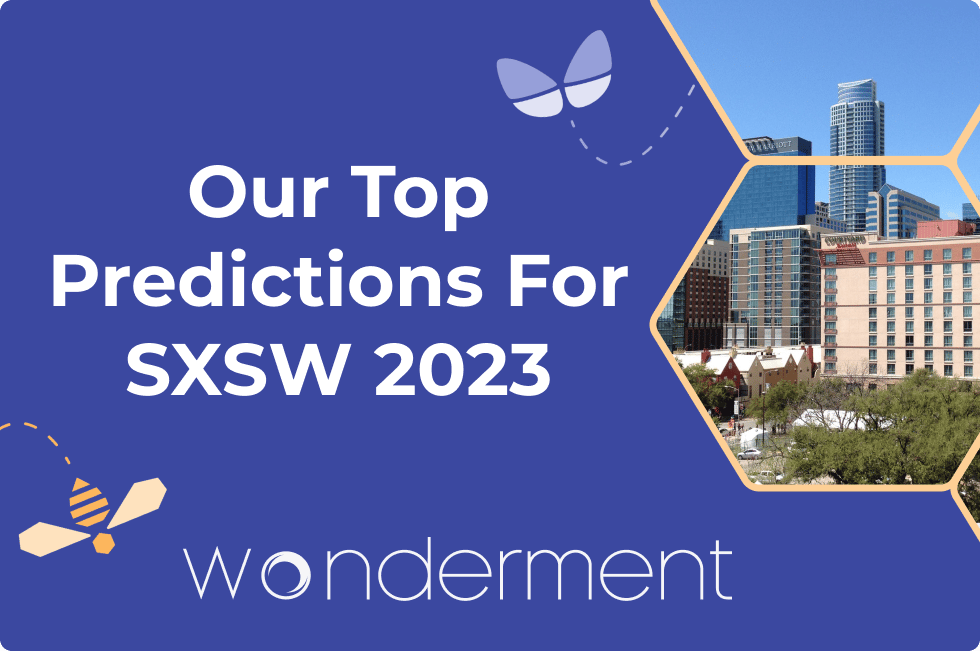 Our Top Predictions For SXSW 2023

SXSW is always a great time to see the latest and greatest in tech. From start-ups to established companies, everyone comes out to show off their latest products and technologies. We’ve been attending SXSW for years and have seen some amazing things come out of it. Here are our top predictions for what we’ll see at SXSW 2023!

Influencers are dominating the marketing landscape, as brands increasingly recognize the effectiveness of Influencer Marketing. With Influencer Marketing providing a cost-effective and varied form of customer engagement, it is no wonder that it has exploded in popularity. Influencers are connecting with their fan base at a rate never seen before in the marketing world. As a result, new marketing opportunities have been created and brands have rapidly adapted to this innovative form of promotion. With more Influencers becoming involved every day, bringing change to a wide range of business sectors.

Tech-Influencers continue to maintain a foothold in the tech marketing space. Social media platforms becoming prominent platforms for businesses to reach out to their audience and engage with potential customers. According to research from 2020, there has been a 31% increase in spending on influencer marketing campaigns as compared to the previous year. This indicates that Influencer Marketing is only going to become more popular in the near future and will be a key component of SXSW 2023.

The Present And Future Of Web3

Web3 is an ever-expanding space of innovations driven by the technologies of blockchain and crypto. For those unfamiliar with Web3, it is the new wave of projects that use decentralized systems for applications and computing. Web3 is revolutionizing many industries and areas from finance to social media networks. There have been many Web3 projects made possible with decentralized peer-to-peer technology. As Web3 continues to evolve and more powerful protocols are brought in, we can expect even more radical developments in the coming years. Web3 and established players in the industry will position themselves to benefit greatly if predictions about Web3’s growing influence turn out to be true. It will be interesting to see how things develop as we enter into an age where Web3 becomes more entrenched in our lives.

Online presence have become increasingly important, but the recent emergence of “anti-social” apps has sparked a new trend. These specialized apps provide a platform to keep track of specific groups or topics that users are interested in while eliminating other distractions. The idea is to give users more control over their online activity by creating an environment that is tailored to their interests. Companies are responding to this new demand by tailoring their services to meet it. Offering functions like newsfeed filters and removal of ads. This allows for a more personal experience for users that also helps reduce the number of present distractions.

Augmented reality (AR) is quickly becoming a part of mainstream technology. AR is a technique utilized to enhance the reality presented to users with digital imagery, audio, or video. As we move into 2023 AR continues to make a more broad impact on the consumer market. AR’s counterpart, virtual reality (VR) has already become well-known in consumer markets but will soon follow suit. As AR offers a degree of sophistication that has yet to be seen on consumer devices, the possibilities seem infinite. AR will be revolutionary in how people interact with both physical and digital media. Creating a completely new realm of experiences that goes beyond what’s previously been achievable.

As virtual reality (VR) technology continues to evolve, it’s becoming increasingly clear that consumers can expect heightened levels of realism when they enter their favorite Vr experiences. As life-like graphics and realistic simulations are integrated into Vr content, users feel a heightened level of immersion. Vr is also becoming more accessible than ever before, from consumer units such as the PlayStation virtual Reality headsets to in-depth Vr systems used in professions like science and engineering. With the ever-growing demand for Vr, it won’t be long until we see Vr become a standard form of entertainment and communication.

Changes In The 3D Printing Landscape

3D printing is revolutionizing the way we consume media. Stepping into applications outside of 3D printable art, models, and trinkets. This method has been around for a few decades but hasn’t been widely adopted until recently. Now, 3D printing buildings are becoming a reality as printing methods become faster and more precise. Consumer 3d printing also accounts for mass customization needs at a fraction of the cost compared to traditional production methods. With 3D printing on such a large scale, it’s no wonder it is becoming an integral part of our consumption habits. Not only does 3D printing make the things we want more affordable and customizable, but it also makes them easier to access.

SXSW 2023 is shaping up to be a groundbreaking event as technology continues evolving and new trends emerge. Get ready to be inspired by thought leaders in all of these fields and more.