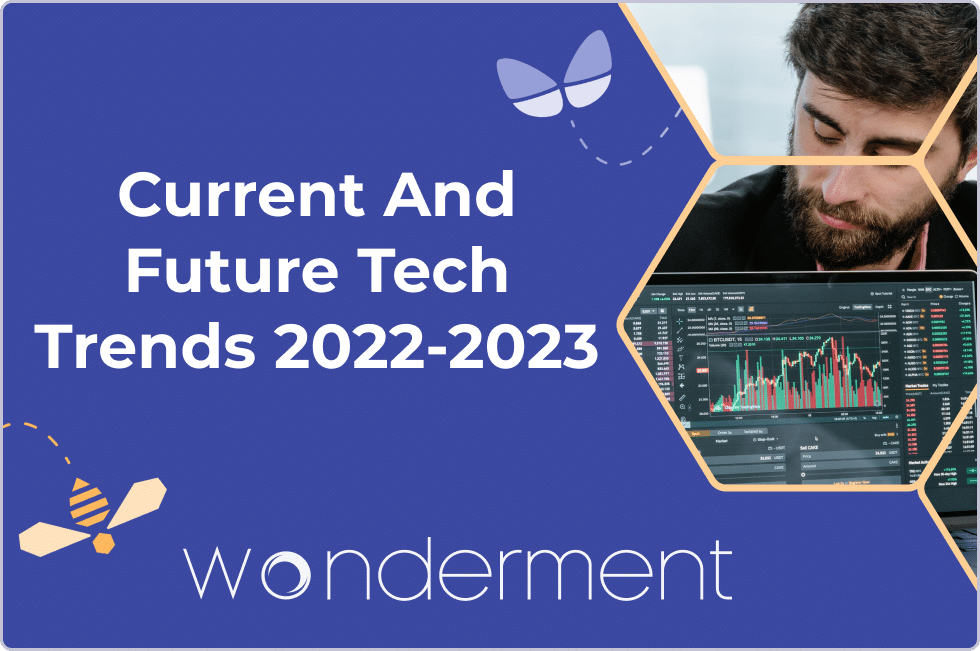 A Guide To Current And Future Technology Trends 2022-2023

The technology landscape is forever changing. With new discoveries, improvement and purpose being added to technology on a daily basis, it’s no wonder that our world has become so heavily reliant on it.

However, this also means that those working in the field of technology must be constantly adapting to new trends in order to stay ahead of the curve.

So, what can we expect in the world of technology over the next few years?

Cloud Computing will Continue to Rise in Popularity

There’s no denying that cloud computing has taken the world by storm in recent years. And it’s only set to continue growing in popularity, with more and more businesses making the switch to cloud-based solutions.

This could mean a shift in growth for otherwise limited server capabilities, data solutions, and the way we think about data storage as a whole.

We’ve previously spoke on the benefits of cloud computing and it’s potential but what about the current state of the shift? One of the most recent events that happened in 2020 was the release of the Apache Cloudstack. This is an Infrastructure as a Service (IaaS) that’s been designed for private and hybrid clouds.

It’s not only useful for well-rounded data solutions but is also open source. Making innovation and progress more easily accessible.

In short, the Apache Cloudstack provides an easy way to set up and manage cloud computing environments. It’s already been used by major companies such as Rakuten, AT&T, and Comcast. So, we can expect to see this trend continuing to rise in popularity over the next few years.

Building Within The Past 5 Years

Developing on the base foundation of cloud computing major corporations like Amazon and Google have been introducing Virtual Machine Models and other forms of cloud services. Making them not only available to businesses but the public as well.

We’ve seen a big increase in the use of these services over the past year and with the release of new updated versions, it’s likely we’ll continue to see this trend grow.

Amazon Virtual Private Cloud (VPC) is one such service that has seen a lot of growth. It allows users to create isolated virtual networks and launch AWS resources in a virtual network. This service is continuing to grow in popularity as it provides more security and control for businesses when compared to other cloud providers.

Google App Engine is another such service that has seen a lot of popularity in recent years. It allows developers to build and run applications on Google’s infrastructure. Providing them with automatic scaling, load balancing, and management.

It’s widely considered that Script Based Languages and Object Oriented Languages are the most heavily used in the world. With functional programming being a close second. Often these are the most popular languages due to their readability and comprehensibility.

However, we’ve seen a recent rise in popularity for low-level programming languages. These include Assembly and C++. The main reason for this is due to the current state of hardware development.

We’re seeing the tech trend shift from general-purpose processors to more specialized ones. This is being done in order to increase performance while decreasing power consumption. Therefore, there’s an increased need for programs that can take advantage of this new hardware. Which is where low-level programming languages come in.

Another big factor that’s driving the popularity of these languages is the rise of artificial intelligence (AI) and machine learning (ML). As these technologies continue to develop, there’s a need for more efficient and faster programming languages. That’s where low-level languages come in as they’re able to provide the speed and efficiency that’s needed for these technologies.

Some of the most popular low-level programming languages right now include C++, Rust, and Go. All of which are seeing an increase in popularity and use.

So, it’s safe to say that we can expect this trend to continue growing over the next few years as more businesses move towards AI and ML technologies.

The tech trend of AI is becoming more widespread with each passing year. However, there is a growing concern over the ethical implications of its use. As AI technologies become more advanced, they are starting to be used in a wide range of applications. Such as autonomous vehicles, facial recognition, and more.

We can expect this trend to continue growing over the next few years as AI technologies become more advanced and widespread.

Most popular Coding Languages of 2022

The most popular coding languages can be generally classified into a few different categories. These include general-purpose, functional, scripting, and object-oriented programming languages.

Some of the most popular coding languages right now include Python, Java, JavaScript, and C++. All of which are seeing an increase in popularity and use.

A Popular scripting language that’s used in a wide range of applications. Such as web development, scientific computing, artificial intelligence, and more. It’s popularity is due to its ease of use and readability. Making it a great choice for beginners and experienced programmers alike.

A versatile programming language that’s used in a wide range of applications. Such as web development, software development, and more. It’s popularity is due to its platform independence and security. Making it a great choice for businesses that need reliable and secure software.

A scripting language that’s used in a wide range of applications. Such as web development, game development, and more. It’s popularity is due to its ease of use and flexibility. Making it a great choice for developers that need to create dynamic applications.

Used in system programming, game development, and more. It’s popularity is due to its speed and efficiency. Making it a great choice for developers that need high-performance software.

The term “low code” refers to the development of software using graphical user interfaces and configuration instead of traditional coding. This type of platform is designed to make the software development process faster and easier.

Some of the most popular low code platforms right now include Mendix, OutSystems, and Appian. All of which are seeing an increase in popularity and use.

These platforms are becoming increasingly popular tech trends with businesses as they allow them to develop software quickly and without the need for expensive and specialized resources.

Security in tech trends has been for the most part a sales pitch. But this is quickly changing as the number of cyber attacks increase. This has led to a greater need for businesses to take security seriously and invest in technologies.

As the world becomes more connected, businesses are at an increased risk of cyber attacks. This has led to a need for more secure and reliable software. Which is where low-level programming languages come in.

These languages are designed to be more secure and efficient. Making them a great choice for businesses that need to protect their data and operations from cyber threats.

Some of the most popular low-level programming languages right now include Java, C++, and Rust. All of which are seeing an increase in popularity and use.

With the rise of cyber attacks, we can expect this trend to continue growing over the next few years as businesses move towards more secure software development practices.

As we can see, there are a few key tech trends that are emerging in the Tech industry. Where businesses are moving towards more efficient and secure software development practices.

So, it’s safe to say that we can expect these trends to continue growing over the next few years as the Tech industry continues to evolve.